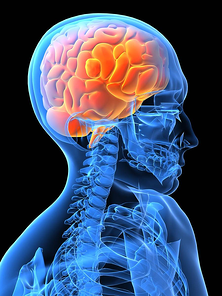 Decreased brain health=nuerodegeneration=poorer quality of life and increased stress on ourselves and those that love us.

1.  Make Sure Your Thyroid Function Is Optimal:

A significant body of science links poor thyroid function and cognitive decline, including Alzheimer’s risk1 (doubling the risk for women).

Data shows that individuals with a baseline higher TSH2 at age 65 had lower scores on mental performance, even though they did not have cognitive impairment at that time. Interestingly, high normal levels of T4 signified even worse cognitive scores and a stronger likelihood of cognitive decline as time goes by.3

It turns out that thyroid issues despite normal TSH levels, known as subclinical hypothyroidism,  can lead to brain decline and brain decline also is a cause of intestinal permeability defects, also known as "Leaky Gut". Remember that Leaky Gut Syndrome, also known as LGS or increased intestinal permeability is a major overlooked cause of autoimmune attack and chronic illness.

The nature of  subclinical hypothyroidism makes it difficult to diagnose using standard thyroid tests. In fact, extensive blood work is generally required. This is how some people can go for years, enduring body pain that never leaves them--all because their thyroid is actually impaired but doesn't appear to be according to standard thyroid tests. To learn more about having thyroid symptoms despite "normal lab tests" go to this page.

Cortisol is a hormone secreted by the outer of two layers of our adrenal glands, the adrenal cortex. It is made in response to stress and so is often called “the stress hormone”. Stress can be physical, chemical or emotional. Our body responds the same way to all stressors, good and bad with increased cortisol.

Cortisol influences, regulates or modulates many of the changes that occur in the body in response to stress including, but not limited to:

Cortisol levels normally fluctuate throughout the day and night in a circadian rhythm that peaks at about 8 AM and reaches it lowest around 4 AM. While it is vital to health for the adrenals to secrete more cortisol in response to stress, it is also very important that bodily functions and cortisol levels return to normal following a stressful event. For many of the patients that I work with, the stress response is activated so often that the body does not always have a chance to return to normal. This can lead to health problems resulting from too much circulating cortisol and/or from too little cortisol if the adrenal glands become chronically fatigued (adrenal fatigue).

Higher and more prolonged levels of circulating cortisol (like those associated with chronic stress) have been shown to have negative health effects, such as:

Chronically lower levels of circulating cortisol (as in adrenal fatigue) have been associated with negative effects, such as:

In regards to managing stress, some of the most important habits I have found to be helpful are:

Fortunately a simple but accurate test can measure your adrenal stress called the The Adrenal Stress Index™, which I often use in my assessment of patients to determine if adrenal issues are a connected to their health challenge. Along with adrenal health remember that the two most serious consequences of LGS (Leaky Gut Syndrome) are compromised liver function and autoimmune conditions.  These two consequences often lead to a long search for help from traditional doctors as LGS is seldom considered as a causative factor in most illnesses.  Instead the various symptoms are treated with drugs or as conditions worsen, surgery.

3.  Re-Wire Your Brain With Neurofeedback

Neurofeedback (also called Neuro Therapy) is a non-invasive process where brain waves are monitored in real time by a computer, which can then use that information to produce changes in brainwave activity. The process of adjusting brainwave activity is known as operant conditioning, which is a method where rewards for positive behavior increase learning capabilities.

Training the brain using neurofeedback can change these brainwaves over time, adjusting them into normal, healthy ranges. It can improve alertness, attention, emotional regulation, behavior, cognitive function, and mental flexibility. When the brain moves back into normal ranges, users will often see a reduction in symptoms.

How Does Neurofeedback Work?

Neurofeedback utilizes a non-invasive technique for monitoring brain activity. Small electrodes are attached to specific areas of the head using paste. Our Neurointegration software records the brain waves and displays the data in real time. During this time the patient is watching a movie or listening to music. The software compares the incoming brainwaves to that of an optimal brainwave in the target range. If the brainwaves deviate from normal ranges, it triggers the audio or video to fade. The brain automatically detects this and refocuses itself back into the proper range. This process is repeated hundreds of times per session. Sessions usually last 30 minutes.

The Brain Is A Learning Machine

Through operant conditioning, the brain is rewarded when the audio or video returns to normal. Eventually, the brain learns to stay in the healthy ranges without the reward stimulus and is able to sustain normal activity independent of the computer. This is achieved by reconnecting functional pathways in the brain.

Neurofeedback does not target any particular disorder. Its purpose is to change timing and activation patterns in the brain. This improves brain regulation, which can impact a variety of symptoms. Different symptoms will require triggering different areas of the brain. The software is designed to target specific areas of the brain according to a patient’s symptoms.

Studies that have looked exclusively at the healthiest elderly people find minimal cognitive decline even into the ninth decade. These data suggest that significant cognitive decline is not an inevitable consequence of advanced age.

So if you want to age well, minimize neurodegeneration and protect against common (but not normal) conditions associated with aging, you need to take matters into your own hands.

It's important for you to know that 90 percent of our brain’s output goes into a neurologic structure called the pontomedullary system. The brain is constantly receiving input from receptors, and it is constantly sending outputs as well. The main output conduit is the brain stem. The connection between all of our organs and our brain comes from the parasympathetic cranial nerve nuclei of the vagus nerve in the medulla portion of the brainstem-just above the top part of your spinal cord.

The vagus nerve enervates the digestive tract and controls everything from the secretion of stomach acid and pancreatic enzymes to intestinal motility and gall bladder contraction.

Since a large portion of the brain’s output goes into the vagus area, and your brain is not firing well, you’re going to have digestive problems, one of which can be Leaky Gut Syndrome.

There are many other keys to brain health and healing leaky gut syndrome, but in my opinion, these three are very important and something we can all work on to improve. If you would like help with any of them or all of them contact me for a case review, so I can determine your best course of action.