The Brain and Gut and Autoimmune Thyroid, Anxiety & Other Conditions

When you have an autoimmune condition such as Hashimoto's, or if you have fibromyalgia, anxiety or depession you must remember there is an important connection between your digestive tract and your brain.  Dr. Michael D. Gershon coined the term "second brain" in 1996 to refer to the powerful brain in the gut known as the enteric nervous system. He is one of a small number of researchers studying brain-gut connections in the relatively new field of neurogastroenterology.  Read this informative article that was printed in the San Diego Union Tribune via the New York Times News Service: 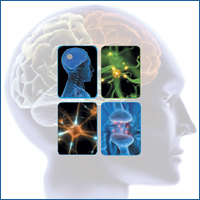 Two brains are better than one. At least that is the rationale for the close ­ sometimes too close ­ relationship between the human body's two brains, the one at the top of the spinal cord and the hidden but powerful brain in the gut known as the enteric nervous system.

For Dr. Michael D. Gershon, the author of "The Second Brain" and the chairman of the department of anatomy and cell biology at Columbia, the connection between the two can be unpleasantly clear.

"Every time I call the National Institutes of Health to check on a grant proposal," Gershon said, "I become painfully aware of the influence the brain has on the gut."

In fact, anyone who has ever felt butterflies in the stomach before giving a speech, a gut feeling that flies in the face of fact or a bout of intestinal urgency before an examination has experienced the actions of the dual nervous systems.

The connection between the brains lies at the heart of many woes, physical and psychiatric. Ailments like anxiety, depression, irritable bowel syndrome, ulcers and Parkinson's disease manifest symptoms at the brain and the gut level.

"The majority of patients with anxiety and depression will also have alterations of their GI function," said Dr. Emeran Mayer, professor of medicine, physiology and psychiatry at UCLA.

A study in 1902 showed changes in the movement of food through the gastrointestinal tract in cats confronted by growling dogs.

One system's symptoms ­ and cures ­ may affect the other.

Antidepressants, for example, cause gastric distress in up to a quarter of the people who take them. Butterflies in the stomach are caused by a surge of stress hormones released in a "fight or flight" situation. Stress can also overstimulate nerves in the esophagus, causing a feeling of choking.

Gershon, who coined the term "second brain" in 1996, is one of a number of researchers who are studying brain-gut connections in the relatively new field of neurogastroenterology. New understandings of the way the second brain works, and the interactions between the two, are helping to treat disorders like constipation, ulcers and Hirschprung's disease.

The role of the enteric nervous system is to manage every aspect of digestion, from the esophagus to the stomach, small intestine and colon. The second brain, or little brain, accomplishes all that with the same tools as the big brain, a sophisticated, nearly self-contained network of neural circuitry, neurotransmitters and proteins.

The independence is a function of the enteric nervous system's complexity.

"Rather than Mother Nature's trying to pack 100 million neurons someplace in the brain or spinal cord and then sending long connections to the GI tract, the circuitry is right next to the systems that require control," said Jackie D. Wood, professor of physiology, cell biology and internal medicine at Ohio State.

Two brains may seem like the stuff of science fiction, but they make literal and evolutionary sense.

"What brains do is control behavior," Wood said. "The brain in your gut has stored within its neural networks a variety of behavioral programs, like a library. The digestive state determines which program your gut calls up from its library and runs."

When someone skips lunch, the gut is more or less silent. Eat a pastrami sandwich, and contractions all along the small intestines mix the food with enzymes and move it toward the lining for absorption to begin. If the pastrami is rotten, reverse contractions will force it ­ and everything else in the gut ­ into the stomach and back out through the esophagus.

In each situation, the gut must assess conditions, decide on a course of action and initiate a reflex.

"The gut monitors pressure," Gershon said. "It monitors the progress of digestion. It detects nutrients, and it measures acid and salts. It's a little chemical lab."

The enteric system does this on its own, with little help from the central nervous system.

It is no surprise that there is a direct relationship between emotional stress and physical distress. "Clinicians are finally acknowledging that a lot of dysfunction in GI disorders involves changes in the central nervous system," said Gary M. Mawe, a professor of anatomy and neurobiology at the University of Vermont.

The big question is which comes first, physiology or psychology?

The enteric and central nervous systems use the same hardware, as it were, to run two very different programs. Serotonin, for instance, is crucial to feelings of well-being.

Hence the success of the antidepressants known as SSRIs that raise the level of serotonin available to the brain.

But 95 percent of the body's serotonin is housed in the gut, where it acts as a neurotransmitter and a signaling mechanism. The digestive process begins when a specialized cell, an enterochromaffin, squirts serotonin into the wall of the gut, which has at least seven types of serotonin receptors. The receptors, in turn, communicate with nerve cells to start digestive enzymes flowing or to start things moving through the intestines.

Serotonin also acts as a go-between, keeping the brain in the skull up to date with what is happening in the brain below. Such communication is mostly one way, with 90 percent traveling from the gut to the head.