Drugs that cause memory loss! Part One of Three 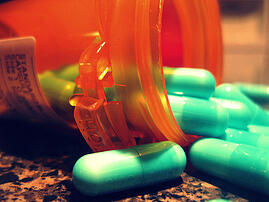 Unfortunately in today’s insurance-driven health care industry, they are often limited in what they can do, and pharmaceutical solutions are usually the easiest path to take. I do not take patients off prescription drugs, nor do I recommend they stop them. That is not my job, it is not within my scope of practice. If I feel a patient might be having an issue with a medication, I give them some information and ask them to discuss it with their medical doctor.

When I talk about drugs that cause memory loss, I don’t mean alcohol and other recreational drugs that make you forget you danced around last night’s party with a lampshade on your head. I mean the prescription drugs that are drilled into our brains by the billions of dollars of advertising spent each month to let us know about the latest and greatest pill that will fix our lives (please ignore the side effects that take up more than half of the commercial or the entire other side of the page of the magazine ad). I’m talking about the drugs prescribed by our well meaning medical doctors who just want to help us, but don’t really have the time to discuss everything with us in today’s insurance-driven health care model. In our country today, the common approach is to prescribe a medication for your complaint, rather than try to get to the bottom of what’s causing that complaint. Then, when the medication that helps one complaint causes a different symptom (side effect), another medication is prescribed to counter that symptom. Then another symptom arises from the second medication, and a third is prescribed to handle that one, and so on and so on and so on. What happens then is that when a person, especially a person old enough to be at risk for memory loss, walks into my office and we sit down and I ask them what medications they’re on, they don’t tell me, they reach into their purse or wallet and whip out a list for me to photocopy because it would take too long for me to write it down.

Ah, let’s start with my favorite - the largest selling class of drugs in the entire world. Statins are prescribed to treat high cholesterol. I could go on a long rant about cholesterol, but this is not what this book is about. Suffice it to say that I do not believe you should ignore your cholesterol, however I also believe the medical profession in general gets a little carried away with prescribing cholesterol medications.

Cholesterol is the building block for substances that are vital for nerves and brain cells to be able to send messages and communicate. As a matter of fact, one quarter of your body’s cholesterol is contained in your brain. These connections between brain cells are vital for memory and learning. Statins can deplete brain levels of cholesterol, which can affect memory. In today’s society where we seem to be on a quest to drive our cholesterol lower and lower, this is not only a good thing. When I hear a patient tell me that their doctor said their cholesterol is normal but they should go on Lipitor® “just in case”, I cringe and hope that patient has long-term care insurance for when they need a nursing home due to Alzheimer’s.

Benzodiazepines work by dampening activity in parts of the brain, including those involved in the transfer of events from short-term to long-term memory. Hmm, that sounds familiar - “transfer of events from short-term memory to long-term memory”.  Memory loss in a bottle! As a matter of fact, that’s why they are often used in anesthesia. Used before a surgery, patients rarely remember the pain and unpleasantness that occurs during a surgical procedure. That’s great for surgery, but can we expect to take these pills daily and have our memories be as sharp as a tack?

The World Health Organizaion reports a “striking deterioration in the personal care and social interactions” in long-term benzodiazepine users.

These medications are prescribed for depression, and recently have become more popular in treating eating disorders, anxiety disorders, obsessive compulsive disorder, smoking cessation, chronic pain and some hormone mediated disorders such as menstrual cramps and hot flashes. Tricyclic antidepressants are thought to cause memory loss by blocking the action of two chemicals that work in the brain - serotonin and norepinephrine. Because these key chemical messengers in the brain are interfered with by these drugs, about 35% of adults taking these drugs report some degree of memory impairment and about 54% say they have difficulty concentrating.

In the next installment, you can learn about memory challenges associated with blood pressure drugs, sleep aid drugs and drugs for incontinence.

If you found value in this article, please use the social sharing icons at the top of this post and please share with those you know who are still suffering with knee pain or other chronic health challenges, despite receiving medical management. Help me reach more people so they may regain their zest for living! Thank you!

*Special thanks to Dr. Brian Smith DC CNS gladly gives me permission to use, post and distribute the chapter in his book entitled "Drugs That Cause Memory Loss"  from the book "What Happened to My Memory? Natural Solutions In The Fight Against Alzheimer's Disease and Dementia". The book available at Amazon.com in both hard copy and Kindle versions.