In the previous blog post, I covered some background information and one of the reasons why gluten sensivity is more prevalent these days, namely inadequate/outdated testing.

Additional reasons why gluten sensitivity and celiac disease are more prevalent include:

Unless you've had your head in the sand, you probably are aware that Monsanto and other conglomerate companies have been messing with our food supply.  They think that changing food via the "better living through chemistry" mindset will make our foods more nutritious or for self-serving purposes make the modified seeds immune to the herbicide chemicals they manufacture.  Wheat has been modified over the years to have more protein, which is the most allergenic portion of wheat.

Deamidation is the product of acid or enzymatic treatment of gluten used in the food processing industry.  This is accomplished because gliadins are soluble in alcohol and cannot be mixed with other foods (like milk) without changing the food’s qualities.  Deamidated gliadin is soluble in water.  Our immune system reacts with greater ferver to deamidated gliadin than to gliadin.

The average US storage time for harvested wheat is approximately 2 years!  During this storage time the waste products of fungi and mold form which are called enterotoxins.  Enterotoxins and be defined as a toxin produced by bacteria that is specific for intestinal cells and causes the vomiting and diarrhea associated with food poisoning.  The enterotoxins lead to a leaky gut which triggers an immune reaction to the gluten that is contaminated.

The Hygeine hypothesis theory "proposes that inadequate exposure to infectious organisms leads to immune dysfunction. Under normal circumstances, the immune system is exposed to various viral, bacterial, fungal, or parasitic challenges and becomes properly calibrated to these real threats following successful defenses. Today's public health successes, coupled with the increased use of antibiotics and vaccines, minimize opportunities to mount successful attacks against genuine attackers. IgE is still present, however, and, in the absence of harmful agents, it begins attacking harmless environmental substances.

There is an enormous amount of scientific evidence for this. Children who have had early infections manifest far less atopy, allergy and autoimmune disease". [1]

Leaky Gut Syndrome LGS is an intestinal condition in which the walls of the intestines are damaged to the point where they no longer function to keep food molecules, bacteria and other unwanted material from entering the blood stream.  As a result of the foreign material entering the blood stream, the immune system is activated and intact gluten molecules or any one of the other wheat breakdown products are targeted for destruction, as are the cells of the intestines. 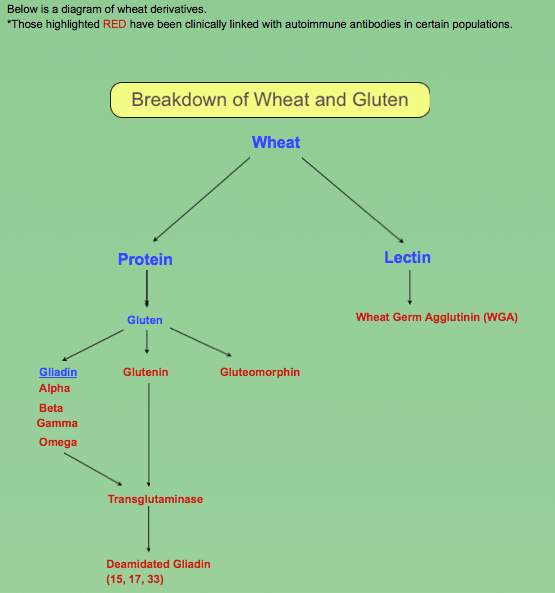 The astute reader will likely deduct that the wheat derivatives listed in the diagram above are the target of some of the specialized testing we offer to detect gluten sensitivity.  Chronic stress alters how our immune system functions and can lead to autoimmune illness such as celiac disease, diabetes and other illnesses. [2] [3]

Chronic stress limits your body's ability to produce the antibodies needed to fight off pathogens. It suppresses the T-cells or lymphocytes allowing pathogens to proceed quickly. Elevated levels of cortisol also damage the part of your body that produce immune cells. These parts are the spleen, lymph nodes, and the thymus gland.

Poor nutrition leads to multiple vitamin and mineral deficiencies.  In case you weren't aware vitamins and minerals are used in the myriad of chemical reactions your body's enzymes carry out on a daily and nightly basis.  "The Standard American Diet (S.A.D.) has been implicated in many diseases and conditions.  The Standard American Diet usually consists of a myriad of processed carbs (cereals, breads, pasta, cookies, cakes etc.), processed meat products, and a few fruits and veggies". [4] Of course all those wheat based carbs will trigger an immune response against gluten in those with the predisposition (people with celiac or gluten senstivity genes).  A majority of Americans with northern European descent will test positive for celiac or gluten sensitivity genes.  I tested positive for one celiac gene and one gluten sensitvity gene and my wife tested positive for two gluten sensitiviety genes.  As a result all our children will have some combination of thee genes as well.

So there you have it...more reason gluten sensitivity and celiac disease is more prevalent.

Remember that better (more advanced) testing and treatment and awareness of these other factors plus your postive action steps can help you overcome or mitigate your chronic health challenges.  Give me a call and see if we can help you.