The Hidden Trigger of Autoimmune Disease

One of the most common but least understood triggers for autoimmunity is molecular mimicry, also called cross-reactivity.

This post will serve as a basic primer on cross-reactivity so you understand how important it is.

When your immune system reacts to a hostile invader, whether it's a virus or an inflammatory food, it tags the antigen with antibodies so it can more quickly recognize it in the future.

Cross-reactivity happens when the immune system confuses tissue in the body with the tagged antigen because they are similar in structure. As a result, it attacks and destroys that tissue as well. This self-attack is called autoimmunity.

For example, if you are sensitive to gluten, your immune system has created antibodies to gluten. These antibodies tag gluten to alert the immune system to destroy it every time you eat it — even if you ingest a tiny amount. This is an inflammatory response.

Can Gluten and Other Grains Affect Your Thyroid?

Somewhere in all of your research you have probably read something about the little wheat protein called gluten that is causing a big fuss. Perhaps, you may be one of many people who is noticing the ever expanding Gluten-Free section at your local grocery store. What is the big idea with this little grain? After all, we have been eating it all of these years right? So why is it being ever so publicized today? Maybe perhaps it’s just a fad-diet? Well fad diet or not this gluten-free thing is here to stay, and it may be contributing to how you are feeling, especially those who have thyroid related issues. 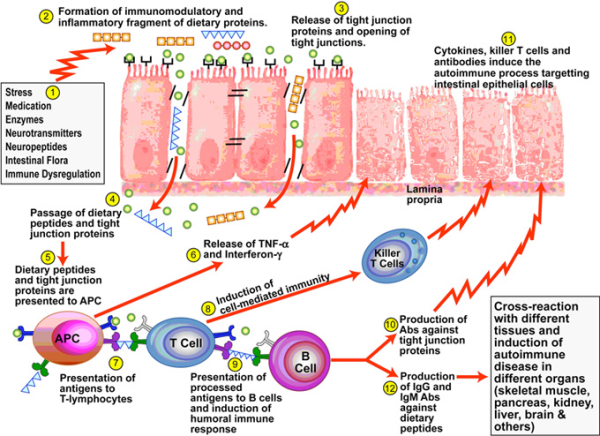 We all have that one chore or project in our house we never seem to get around to. Maybe it's cleaning the garage, finally getting the family picture framed, or reorganizing your kitchen. You know it would not take much time to accomplish the task and you will feel better when you are finished, but you just never quite seem to make the time.

Living with an autoimmune illness and chronic pain is similar. You know there probably is a better way to treat your ailments than the constant drugs, appointments and new treatments. Yet, you continue to go about your medical routine, succumbing to what feels like the inevitability of living with chronic pain and autoimmune illnesses and the host of drugs and doctors that go along with it.

However, just as you will feel better when you finally tackle that nagging chore, you can find relief from your autoimmune illness and chronic pain by stepping outside the traditional approaches to these ailments.

Gluten sensitivity is an under diagnosed common trigger of many autoimmune illnesses and chronic pain. Once patients discover they have a gluten sensitivity and commence a gluten free diet, their illness and pain often disappears. It's an amazing yet incredibly simple diagnosis that brings relief to many people suffering needlessly each year. Let's take a closer look at how this simple diagnosis can bring the much sought after cure you have been longing for.

Gluten Sensitivity: The Basics
Gluten is a protein found in common grains, specifically wheat, rye, barley. New studies show gluten is contained in all grains. Gluten is what gives dough its elasticity and helps it to rise. It is the composite of two proteins, gliadin and glutenin. Most people can eat and digest this protein without any problems.

However, many people suffer from gluten sensitivity or essentially an allergy to gluten. Unlike other allergies, say to peanuts for example, gluten does not typically cause anaphylaxis. It does, however, trigger the basic allergic response. When you consume gluten, your immune system produces antibodies to fight off what it perceives as harmful to your health. This immune response causes inflammation in your body leading to a host of autoimmune illnesses.

How Gluten Can Be Causing Your Chronic Pain Many who live in chronic pain spend a lifetime trying to find the cause of their pain. Traditional medicine often treats the symptoms, addressing each ache and pain as it's own illness. Take this drug for this pain. Take another drug for another ache. You may often get conflicting advice as well. Try increasing your activity. No, you need to rest. Try ice. No, try heat. Well-meaning friends and family offer all kinds of advice and old wives' tales and maybe even accuse you of making it all up.

At what point do you give up on all the misguided medical advice and give in to a life of chronic pain?

Before you give up and give in, you need to know about a common cause for chronic pain and a problem that can be solved relatively simply. A sneaky culprit may have quietly been wreaking havoc on your body for years. Gluten.

What is Gluten?
Simply put, gluten is a protein found in wheat, barley, malt, rye and some oats. People with a gluten sensitivity often have no idea the kind of destruction this protein is wreaking on their bodies. The traditional medical community has only recently started to acknowledge how gluten can cause damage.

People with a gluten sensitivity cannot digest this protein. As the protein travels through their digestive systems, it damages the villi in their intestines, the part of your intestines that gather nutrients from your food. Over time, you lose the ability to absorb nutrients into your body leading to a host of health problems including:

Celiac Disease Is NOT the Same Thing as Gluten Sensitivity 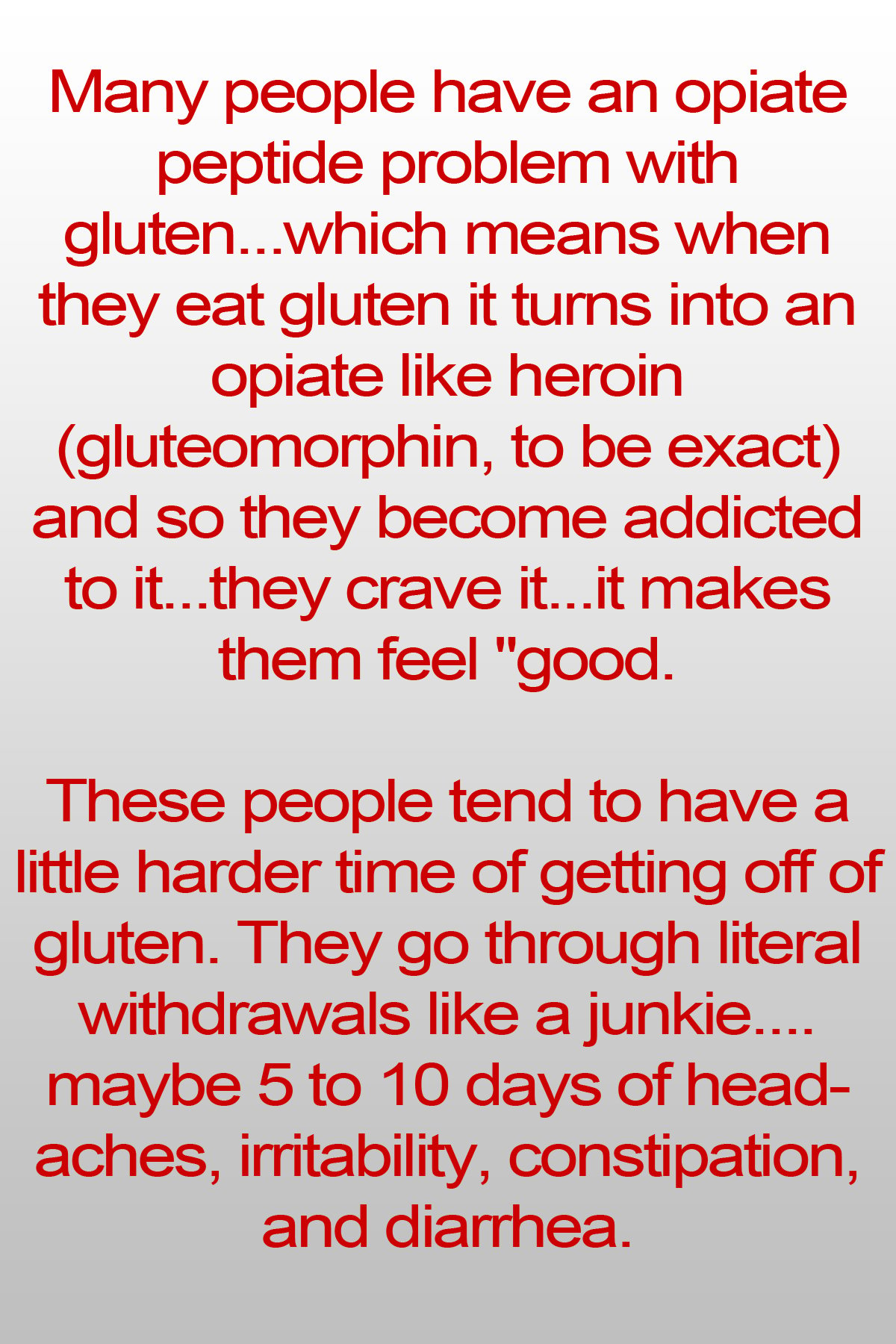 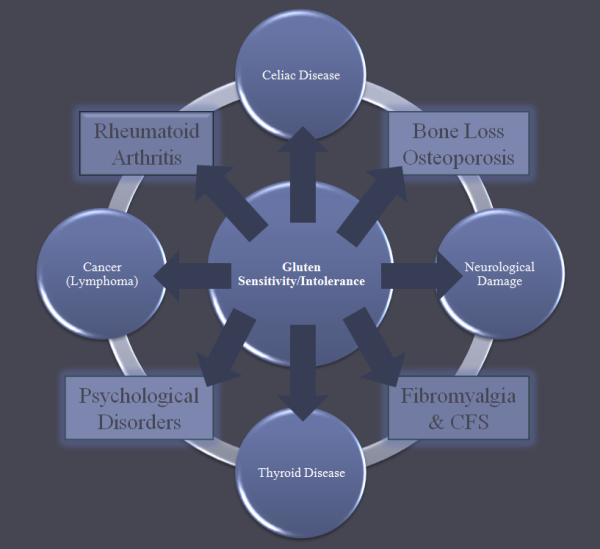 Gluten sensitivity is often least expected as a cause for a chronic health condition.  Health challenges such as Hashimoto's, Chronic Fatigue Syndrome, Rheumatoid Arthritis, Osteoporosis, Depression and Anxiety, Balance Disorders, Irritble Bowel Syndrome, Multiple Sclerosis, ADD/ADHD, Autism, Dyslexia, and many other maladies can be caused or triggered by gluten sensitivity.