Find me on:
Facebook LinkedIn Twitter
A common misconception among the gluten sensitivity and celiac population (which is estimated to be 1 in 100 to 1 in 166 people in the United States) is you can stop the autoimmune destructive process JUST by avoiding gluten.  Unfortunately this is just not true. [1], [2]

There is disagreement globally about just how much gluten in food [as cross-contamination or as an additive (remember deamidated gliadin from my last article)] that will promote the continued damage to intestinal mucosa.  Some researchers promote 200mg and others as few as 20mg.  The "gluten threshold" topic is currently under evaluation by the Codex Alimentarius, the WHO/FAO commission that is in charge of setting food standards at the international level.[3]

Hidden gluten can be found in many manufactured food products in various forms under misleading names, like “modified food starch.” People with celiac disease and gluten sensitivity must learn about all sources of gluten and read food labels thoroughly.  In addition if proper testing reveals you have gluten sensitivity or celiac disease, you will also be well served to also be tested for cross reactions to foods that can react with the gluten antibody and avoid any of the foods your testing reveals you are reacting to. 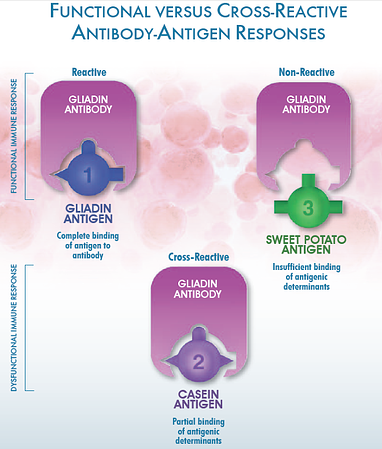 The best strategy to help heal the damage is to combine gluten avoidance, cross reaction food avoidance WITH gluten and casein digestion enzymes (DPP IV enzymes) along with other individualized specific nutritional support that “puts out the fire of inflammation” in the gut.[4]

Typically I will use GlutenFlam(K-52) from Apex Energetics and it contains:

In the next few paragraphs a discussion of what each of the ingredients do for those with gluten sensitivity and/or celiac disease is in order.  I must warn you  -  there will be several words you may not recognize in these next few paragraphs.  Descriptions of parts of the immune system is complex and has it's own lexicon.  I do my best to translate the terms as they come up, though...so forge ahead!

DPP IV enzymes are involved in the break down of proteins, such as gliadin (grain protein) and casein (dairy protein), and in modulation of the immune response.  Research has demonstrated that supplementation with DPP IV in trace quantities led to rapid destruction of the gluten peptides and provided therapeutic effects for gluten-sensitive subjects.

Brush border enzymes (amylase, cellulase, invertase, and lactase) can be effective in digesting carbohydrates, proteins, and fats without causing irritation and digestion of the intestinal walls in compromised malabsorption or celiac disease subjects.  Heavy dose pancreatic enzymes are NOT suggested with compromised or severe intestinal permeability due to their ability to digest the intestinal wall. This is why before taking ANY supplements you need to consult with a knowledgeable nutritionist - so you don't harm yourself!

The gluten response in the intestinal tract with gluten-sensitive and Celiac disease subjects promotes a severe inflammatory cascade.  Several key antioxidant flavinoids have been shown to be specific in quenching this response.

Gut microflora (bacteria in the gut) reponses trigger tumor necrosis factor-induced intercellular adhesion molecule-1 (ICAM-1) upregulation, and are inhibited by the flavinoid apigenin.  when ICAM-1 is increased or upregulated - we are more prone to infection with viruses and it also promotes Leaky Gut Syndrome (also known as intestinal barrier breakdown).  The good news is that apigenin helps reduce all of this!

Quercetin has been shown to have a specific activity against antigen-induced histamine secretion in intestinal mast cells.  Remember histamine promotes an allergic response, so quercetin can reduce this problem.

The flavinoid, luteolin, has demonstrated the ability to prevent lipopolysaccharide-induced NF-kappaB kinase activity in intestinal epithelial (wall) cells and dendritic (brain and nerve) cells as well as TNF-alpha and IL-8 on colon epithelial cells.  Lipopolysaccharides (LPS) also known as lipoglycans, are large molecules consisting of a fat joined loosely with a chain of sugar molecules (polysaccharides); they are found in the outer membrane of Gram-negative bacteria, act as endotoxins (toxins within our body) and elicit strong immune responses in animals and humans.  NF-kappaB plays a key role in regulating the immune response to infection. On the converse, incorrect regulation of NF-kappaB has been linked to cancer, inflammatory and autoimmune diseases, septic shock, viral infection, and improper immune development. NF-kappaB has also been implicated in processes of synaptic plasticity and memory.  In other words this dude named NF-kappaB can help our immune system, but if nudged the wrong way (by LPS) will make our immune system turn against us and promote autoimmunity and damage to our brain - YIKES!

So the good news is that BESIDES avoiding gluten FOR LIFE, you can help keep the inadvertant intake of gluten from keeping you from the recovery you now want, by using specific supplementation including Gluten-Flam (K52).  We carry this product in our office dispensary for your convenience.

The next step is to discover what causes Leaky Gut Syndrome, find out if you have it and to what extent and learn what you can do to heal this damage as part of your health recovery.  I will discuss this in a future blog post...