Gluten Epitopes - Your Hope For Recovery From Your Illness

If you've had a chronic health challenge for a while such as; diabetes, rheumatoid arthritis, fibromyalgia, autoimmune thyroid, schizophrenia, ADD or ADHD, peripheral neuropathy, chronic fatique, irritable bowel syndrome, can't gain weight, can't lose weight, etc., you may have been tested for gluten sensitivity.  That is great as your doctor was thinking out of the box.

More and more doctors are looking for gluten sensitivity and celiac disease as a root cause of many illness.  In fact one in about 133 people have this malady and don't know it.

As I have discussed in prior articles, traditional testing for gluten sensitivity is just not adequete and as a result your health suffers.  You end up merely having your symptoms treated with various drugs.  The real cause continues to wreak havoc on your health and you are left to fall apart as you age.  This does not have to be the case.

Recognizing the gap in testing, Dr. Aristo Vojdani has developed special tests to measure sensitivity to the gluten epitopes.  Dr. Aristo Vojdani obtained his Ph.D. in the field of microbiology and clinical immunology with postdoctoral studies in tumor immunology at UCLA. Vojdani’s ongoing research, spanning a 40-year career, focuses on the role of environmental factors, such as toxic chemicals, infections and dietary proteins and peptides in complex diseases. An owner of 15 U.S. patents for laboratory assessments, he has published over 120 peer-reviewed articles in scientific journals. Dr. Vojdani is CEO and technical director of Immunosciences Lab., Inc. in Los Angeles, CA, a member of the editorial board of four scientific journals, and a guest editor of six journals.

What are gluten epitopes?  How can you get tested for sensitivity to them?  Those are the questions that will be answered in this article.

The first epitopes that are important to test for are known as gliadin epitopes and consist of:

Research shows that 50% of children with celiac disease do not respond to alpha gliadin (the most common test for celiac disease as discussed in a previous blog post), but do test positive to a diverse set of gliadin and glutenin peptides, including 6 novel epitopes (Gastroenterology, 2002; 122:1729-1737).  Other researchers have confirmed the folly of just testing alpha gliadin (Journal of immunology, 2009; 182:4158-4166).  In fact wheat-dependent, exercise induced anaphylaxis (WEDIA) is an allergic reaction provoked by the combination of wheat-ingestion with physical excercise.  Among wheat proteins, omega-5 gliadin has been reported as a major allergen in the anaphylaxis.

When I explain that a patient MUST eliminate wheat and other gluten containing grains from their diet, I have to tell them about possible withdrawal symptoms.  Yes, you read that correctly - withdrawal symptoms.  Gluteomorphin attaches to the same opiod receptors in the brain that morphine and other opiates do.  So "going cold turkey" can lead to the individual feeling worse and developing new symptoms when starting a gluten-free diet.  The symptoms can last a few days to several weeks!  But if they don't remove gluten from the diet they will never get the chance to regain their health.

The epitope named prodynorphin is another opiod that is a basic building block of endorphins.  Endorphins ("endogenous morphine") are endogenous (made by the body) opioid peptides that function as neurotransmitters (brain and nerve signaling chemicals).  They are produced by the pituitary gland and the hypothalamus in the brain during exercise, excitement, pain, consumption of spicy food, love and orgasm, and they resemble the opiates in their abilities to produce analgesia (pain reduction) and a feeling of well-being (euphoria).

Prodynorphin has been shown to play a central role in many processes in the brain, including how well people feel about themselves, their memories, and their perception of pain.  People who don't make enough of prodynorphin are vulnerable to drug addiction, schizophrenia, bipolar disorders, and a form of epilepsy.  Gluten sensitivity is known to lead to prodynorphin antibodies and potentially to neurochemical disorders (brain chemical imbalance).

My blood type diet certification through the Institute for Human Individuality has alerted me to the issues related to the next epitope to be discussed; Wheat Germ Agglutinin (WGA).  Wheat germ agglutinin is a lectin found in wheat.  Lectins have the ability to attach to sugars or carbohydrates on the surface of human cells.  What makes us have a particular blood type is the presence of a specific carbohydrate structure on our red blood cells.  WGA can cause clumping of human red blood cells, a process called agglutination.   The process of agglutination occurs when someone receives the wrong blood type during a blood transfusion.  WGA is found in the highest concentration in whole wheat products, including whole sprouted wheat bread and other products.

Of course wheat germ agglutinin is NOT found with traditional gluten testing.  It is important to note that WGA can do direct damage to the tissues of the body even if you do not have the genetic tendency to react to gluten - meaning you don't have to have gluten or celiac sensitivity genes to react to WGA.  In fact WGA can pass through the blood-brain barrier and attach to myelin and inhibit nerve growth factor.  Myelin is the protective sheath on nerves and nerve growth factor is important for the growth and maintenance of neurons.  So, if you are so predisposed, wheat can cause brain damage!

Anti-WGA antibodies can also cross react with other proteins, which means they may contribute to autoimmunity.  Remember autoimmunity means your own immune system attacks your own body tissues.  WGA plays a role in the development of celiac disease that is entirely distinct from that of gluten. 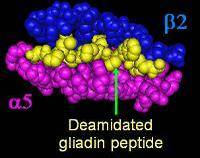 Hopefully by now you are following the concept that there are many things your body's immune system can react to (antigens) in a way that causes illness.  If you don't get tested for these things you will potentially never get well - or worse - have added health challenges or disease to contend with as time marches on.

A few last words are necessary to further clarify one of the epitopes to consider before I end off this blog post.

Deamidated gliadin is the product of acid or enzymatic treatment of gluten often used in the food processing industry.  The purpose of deamidating gluten (which is alcohol soluble) to make deamidated gliadin (which is water soluble) is to make the gliadin able to mix with other foods (like milk) without changing the foods' qualities.  Unfortunately for us, our immune system is way more activated by deamidated gliadin!

These so-called wheat isolates have been shown in a double-blind, placebo-contolled study to cause problems.  In this study, subjects did not react to native wheat flour, but had severe reactions to deamidated wheat isolates. (Journal of Allergy & Clinical Immunology, 2003 Apr;111(4):897-9.)

The extensive use of deamidated wheat isolates in the food industry may be the major cause of hidden food allergies.  These isolates are used as food emulsifiers, gelling agents, film formation aids, stretchability agents in meat products, sauces, soups, and as clarifying agents in red wine.  Researchers state: "Because food isolates or deamindated gluten are new food ingredients, when allergy to wheat is suspected, immune reaction to wheat isolates should be tested." (European Journal of Inflammationm, 2008. Jan;6(1):1721-1727.)

So to recap, you can get deamidated gliadin from the processing of wheat by food processors AND by your own body via the enzymye tissue transglutaminase.

It turns out that antibodies to deamidated gliadin is a better diagnostic test for celiac disease that the conventional gliadin antibody testing.

To make the diagnosis of gluten sensitivity more accurate, 3 different deamidated gliadin peptides should be tested for:

Currently conventional laboratories are only testing for:

Measurement of only these two antibodies will miss many cases of gluten sensitivity immune disorders.

Fortunately I am affiliated with a new advanced laboratory (Cyrex™ Laboratories) and they have a great test known as the Array 3 - Wheat/Gluten Proteome Reactivity & Autoimmunity test.  All the items I wrote about in this blog article (and more) are tested via this profile.

So the good news is - even if other lab tests you have had during the search for the cause of your chronic health condition(s) turned up nothing - there is still hope.

Any and all of the current Cyrex™ Arrays 1-4 may be ordered through Dr. Karl R.O.S. Johnson, DC.

If you have further questions, please send your questions to DrJohnson@wellnesschiro.com.  I would encourage you to forward this information to any and all that you know.

If you found value in this article, please use the social sharing icons at the top of this post and please share with those you know who are still suffering with chronic condition symptoms despite having medical managment. Thank you, help me reach more people so they may regain their zest for living!