Autoimmune Diseases On The Rise. How To Minimize Your Risk

Despite enormous expenditures for health care in the United States, several life-impacting chronic conditions and diseases are on the rise. A large number of patients who visit my office with a chronic health chanllenge are found to have some type autoimmune basis for their health decline via specific testing.

Recently a research paper was published on the topic of autoimmune disease and it opened with this statement: "There has been a marked increase in the incidence of autoimmune diseases in the past half-century. Although the underlying genetic basis of this class of diseases has recently been elucidated, implicating predominantly immune-response genes, changes in environmental factors must ultimately be driving this increase". [1]

Unfortunately so many environmental triggers can play a role in triggering autoimmune illness as depicted in the diagram below: 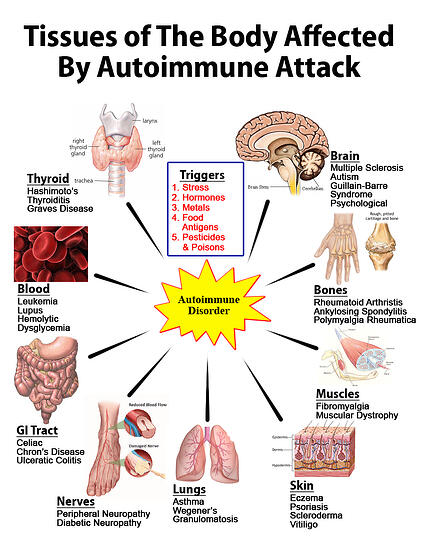 Noted health care author, Dr. Jeffrey Bland, PhD further clarifies the impact of autoimmune disease on our population with this statement, "Collectively Autoimmune Diseases have been identified in about 24 million people in teh US, and only 1/3 are diagnosed. That means about 72 million people have an autoimmune (AI) disease. It's not looked for. Our system waits until the signs and symptoms are severe enought with organ failure and irreversible damage before we identify it."

One of the best ways to minimize your risk is to focus on identifying the root cause of your health challenge, rather than just treating the symptoms with medications.

If you happen to have an autoimmune process at the root of your health challege and several years go by without identification and proper treatment, the tendency is for additional autoimmune processes to take hold. For example, in the United States 90% of low thyroid function is attributed to Hashimoto's. [2]

Being checked for the antibodies that show you have Hashimoto's despite having normal thyroid function (euthyroid), is rarely done. Since so many patients come to me with stubborn thyroid symptoms, despite being medically managed, I had to test deeper. I have discovered many many autoimmue cases. Typically the hypothyroid patient is also genetically gluten intolerant. I discuss the connection between autoimmune thyroid and gluten intolerance in another blog post, which you can read by clicking here. Sadly, due to the lack of deep testing, many of these hypothyroid patients also have autoimmune attack on their gut, dermis of their skin and/or nervous system.

By the time this type of patient has consulted me, they have been to numerous other doctors and are presenting at my office as a last resort. Thankfully many can be helped through a fairly lengthy process that includes diet changes, specific nutritional support, lifestyle changes and perhaps brain-based therapy and NAET augmented by Digitial Meridian Testing and treatment using the AcuGraph.

Not too long ago I helped a paitent who was suffering with thyroid and fibromyalgia health challenges. She desperately wanted to get well. She had a doctor examine her in the past and he completely dismissed all of her symptoms. In fact he referred her to a psychiatrist … implying that she was crazy. She lost trust in doctor's at that point. When asked how her life was before her treatments she says: "I had no life." Her symptoms got so bad that she contemplated suicide. Take a look at the video below:

Nancy is excited for ther new found zest for living. She has faltered a few times, trying to see if she could periodically consume foods we found were damaging her health. Right away her pains would come back and then she truly knew that what the tests discovered were correct. I've heard there is a difference between learning and knowing, and in Nancy's case she now knows what she can eat and what she cannot.

If you suffer with a chronic health challenge and you would like to see if you can reclaim your life, consider a case review.