Celiac Disease Is NOT the Same Thing as Gluten Sensitivity

The reason I'm bringing this point up is, I see 30 to 50 people a month that tell me, "Oh, I've been tested for gluten, my doctor said I don't have Celiac, so I’m fine."

And what that tells me is the doctor does not understand Celiac disease.

So let me give you an explanation. Gluten is a protein that's found in wheat and barley and rye---but that's just the beginning.

Gluten is not the only part of wheat, rye and barley that can cause an immune system reaction.

Gluten sensitivity is when you have an immune system reaction to ANY part of wheat:

When this sensitivity leads to an autoimmune attack on your small intestine---now we're getting into this thing called Celiac Disease.

The supposed "Gold Standard" for diagnosis of Celiac Disease is small intestine biopsy---but even this has major flaws.

But--just so you know, research shows convincingly, that a lot of people with positive "celiac" antibody tests (antiendomysial antibodies, anti-tissue transglutaminase antibodies) DO NOT
have a positive small intestine biopsy.

So the biopsy is not useful in my opinion. However, when you go to see your medical doctor or the gastroenterologist they'll order an anti-endomysial antibodies or tissue transglutaminase antibodies.

You could have a variety of symptoms, maybe even some GI symptoms like:

Or, you could be seeing a doctor because you have infertility problems or you've got joint pain, seizures, migraines....or any other symptoms that could be related to gluten sensitivity. And the doctor will typically order anti-endomysial antibodies or tissue transglutaminase antibodies to determine if you have Celiac disease.

That's one test; it's not the only test. The results of that anti-endomysial antibody test--if it's negative--DOES NOT mean that you don't have a problem with gluten.

Because --remember the glutenin, the gliadin isomers, the wheat germ agglutinnin?-- you could have a problem with any of those things--be GLUTEN SENSITIVE and not have Celiac Disease.

I hope that's making sense. I see a lot of people that were tested for Celiac disease five years ago, two years ago...and been told they don't have a problem with gluten and so they keep
on eating it. And it destroys their health.

These are people with a variety of autoimmune conditions that have led to infertility, Hashimoto's, Multiple Sclerosis....and they've been tested in the past and told that they don't have a gluten problem, and that is just absolutely not accurate.

However, I'm going to save you some time and money....

Just go 100% gluten-free (And not just for a couple weeks) and see if you feel better. Do it forever and ever, amen. 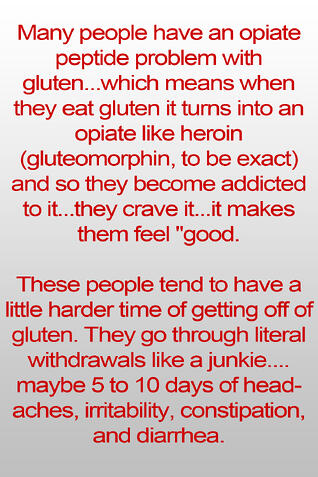 Save your money on testing, just go gluten-free.

Please don't think, that if you've been tested and your doctor has told you, "Well, you don't have Celiac Disease" that you don't have a gluten problem. That could be a terrible mistake.

As far as testing, the best thing to do is to get comprehensive testing for all the different components of wheat (wheat germ agglutinnin, glutenin, gliadin isomers). Of course, you've got to find a doctor who understands that, someone who'll be able to do it for you, or you could just go gluten-free forever anyway. I would be surprised if you didn't feel somewhat better.

Going gluten-free may not be the thing that totally turns your life around but you'd be surprised. I get emails every month with people saying, "I went gluten-free and my life has totally changed. I feel so much better." That's great.

The takeaway is:
Celiac is one type of gluten sensitivity, not the only type.

If you found value in this article, please use the social sharing icons at the top of this post and please share with those you know who are still suffering with chronic condition symptoms despite having medical managment. Thank you, help me reach more people so they may regain their zest for living!

Thank you to Dr. David Clark, DC for this guest blog post